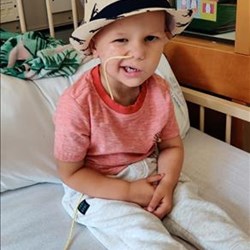 Dax was such a loving, cheeky and fun loving little boy. Our much loved boy. He heartbreakingly passed away at the age of 2 years old.

On March 4th 2020 we left with our daughter, Darcie and our son, Dax for a surprise trip to Disneyland Paris. To celebrate Darcie’s birthday. Whilst there, Dax became unwell, his left side of his face became paralysed and a hospital diagnosed Bells Palsy but highly recommended an MRI on our return home.

Once we returned home Dax was misdiagnosed again with Bells Palsy and prescribed steroids but was not given an MRI scan despite us requesting.

On March 31st 2020, we took Dax to the children’s hospital again. Dax had started vomiting and lost his ability to balance or walk. He was kept in hospital and given two MRI scans. They found a 0.5cm tumour which they diagnosed as a Vestibular Schwanomma, a benign tumour. They advised against surgery and to scan again in 3 months. We trusted the professionals but gradually became uneasy and disagreed with the treatment plan.

We researched thoroughly and reached out to a specialist surgeon in San Diego. We crowdfunded the funds for Dax to receive surgery in San Diego. But things quickly changed.

Dax had a white growth and blood coming from his ear, the same side of the tumour. Despite multiple hospital visits, calls and a gp visit, this was not taken seriously. The growth kept growing and the 3 antibiotics given, none of them done a thing. We took Dax again to the hospital where he was finally admitted for a scan and with aspiration pneumonia.

May 18th 2020, our world crashed down. Dax had an MRI which found the tumour was now over 4cm and putting critical pressure on his brain and brain stem. It had also grown out his ear, as we thought and as we’d been told was impossible. It was cancer. A very aggressive cancer.

Dax was diagnosed with Embryonal Rhabdomyosarcoma. Dax endured so much treatment including brain surgeries, intense chemotherapies, stays in HDU and also in PICU. Dax developed Hydrocephalus post surgery and spent almost a week on a ventilator and had to have a shunt placed to regulate the fluid on his brain.

16th July 2020, Dax’s latest MRI results showed that despite the tumour from his ear had massively decreased, the rest had grown and spread. We were told those horrific words no parent want to hear, “ there’s nothing we can do”

We didn’t want to give up, Dax was doing well. So we tried an alternative chemotherapy as a last ditch effort to save Dax.. However, Dax became very unwell and his heath continued to decline quickly.

He had an incredible strength and bravery.

We will love and miss him always.

We will always continue to raise awareness, support for funding and fundraise for change in childhood cancer. Dax deserved better, he deserved more.

You can see Dax’s full journey on our Instagram page @we.are.the.peeks