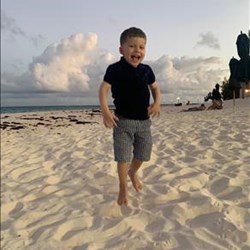 £6,663.07
William Nicholas Kellaway was born on 24th November 2014. His mum, Gemma, dad, Rich, uncle Nick, nana Sue and grandad Roger fell in love with him immediately and he became the centre of their world.

A bright eyed and gorgeous baby boy, William was heartbreakingly diagnosed with Acute Myeloid Leukaemia at a very early age and spent many months undergoing gruelling treatment in hospital.

When William was able to be at home, he was never happier than when he was snuggled up and reading with his mum and playing with his dad. He also loved playing in the garden at his grandparents’ house with them.

In 2017, on 4th March, William became a big brother to Eva Grace and although, as with all brothers and sisters they didn’t always see eye to eye, he loved her very much. If at a party and one of them felt nervous, they would always hold hands and tackle it together.

Although William was only with us for a short time, he had a big personality and it was hard not to notice him. His funny, dry comments, sense of humour and sideways glances (which were the mirror image of his Dad) always made us laugh.

William attended St David’s Prep where he was a popular and happy pupil, who made friends easily and loved to learn. He had such fun at school and adored his teachers and had a passion for everything they taught him.

He was also lucky enough to go on holiday to some amazing places and make treasured memories with his family, he loved being on an aeroplane, exploring new places and spending time with those he loved more than anything in the world.

Even though he was only 5 years old, William was wise beyond his years. He had an extremely logical and scientific mind and loved building lego and doing puzzles.

William was such a kind and happy boy, who loved his family and friends dearly. He fought so incredibly hard against Leukaemia and tragically passed away on 8th September 2020. Taken far too soon, he will be hugely missed by all who were lucky enough to have known him. We love you always William. X 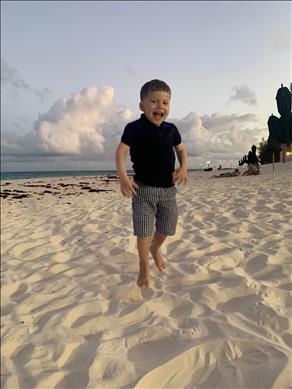